As mentioned earlier I have an ongoing project with building a system for easy experimentation with high vacuum. Often these experiments require high voltages, heated filaments for thermionic/ion emission or various intermediate voltages for electron beam focussing etc. To make experiments easy I wanted to build a number of power supplies that much like lab- power supplies could be voltage and current controlled but at much higher voltages and with floating outputs so they could be connected in series and used in both polarities. These are my experiments so far.

The first experiments I did involved a heated tungsten filament held at a negative 500-5000V potential. The filament itself needed around 10V.  To create a isolated  0-12V supply I used a simple self resonating Zero Voltage Switching circuit: 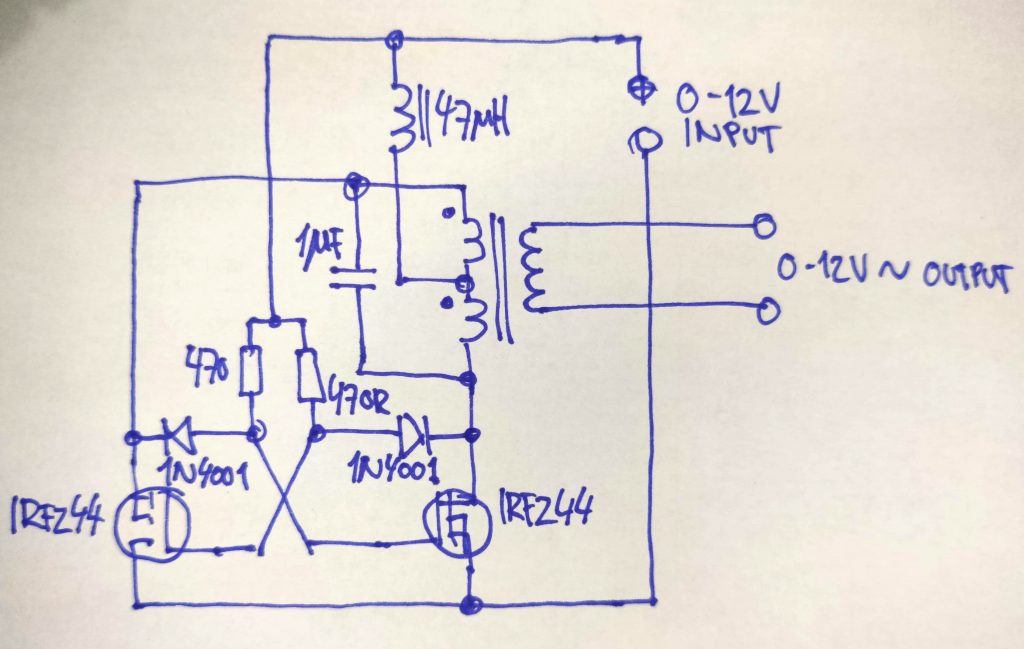 For the output transformer i used a common mode filter from a switching mode power supply. These filters are essentially a toroid transformer with two opposing windings. By connecting these in series they could be used as a center tapped primary windings.

The secondary was wound with PTFE coated wire to insure a good isolation. The output voltage was simply varied by changing the input voltage.  Applying high voltage to the filament could now be done my simply connecting it to one of the filament terminals.

Rather than just changing the input voltage and hoping for the best I wanted to monitor and control the actual current through the filament. This can be done in several ways but I opted for using a current sensing transformer to monitor the current while maintaining high voltage separation. 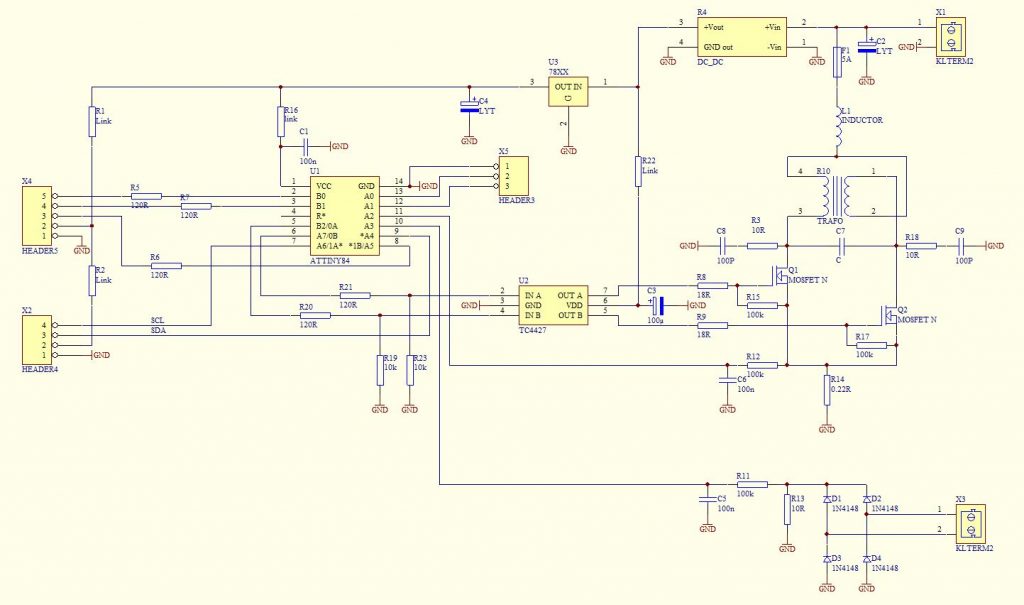 Variable pulse width modulation is generated by a ATTYNY84 microcontroller and fed to two low side MOSFETs in turn driving a toroid output transformer. Current feedback is provided by an 1:100 current transformer. A I2C LCD display and a step encoder provides user interface.

Since I wanted to build several power supplies I tried to use a automotive ignition coil as the high voltage transformer because it was cheap and easy to source. These coils can easily generate tens of kilovolts in flyback mode but I thought I could use it as a regular transformer for the relatively moderate 5kV output. Most ignition coils are auto transformers meaning that both the primary and secondary is in series. Thought I could use this method for driving the coil: 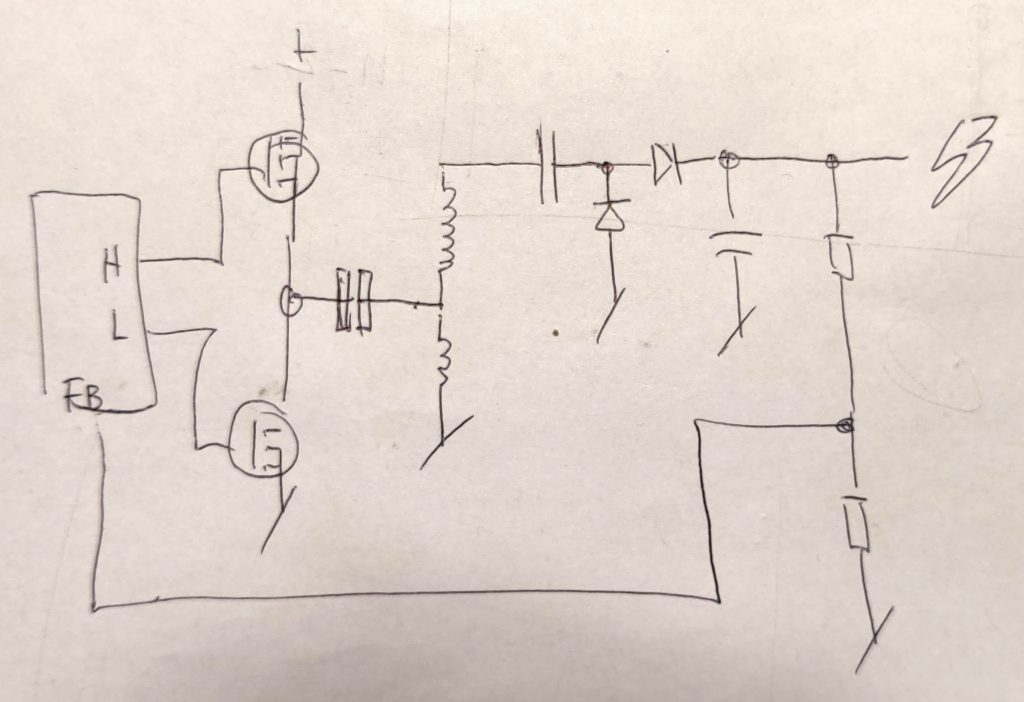 Two MOSFETs generate a square wave signal that is fed to the primary via. a large capacitor. The output from the secondary is rectified to a negative DC voltage.

A quick test revealed that the output of the transformer reached around 1kV with a 19V input. Since I needed 5kV I thought that I could use a voltage multiplier i place of the rectifier. Build this multiplier from 330nF/1500V induction hotplate capacitors and multiple 1N4007 diodes in series: 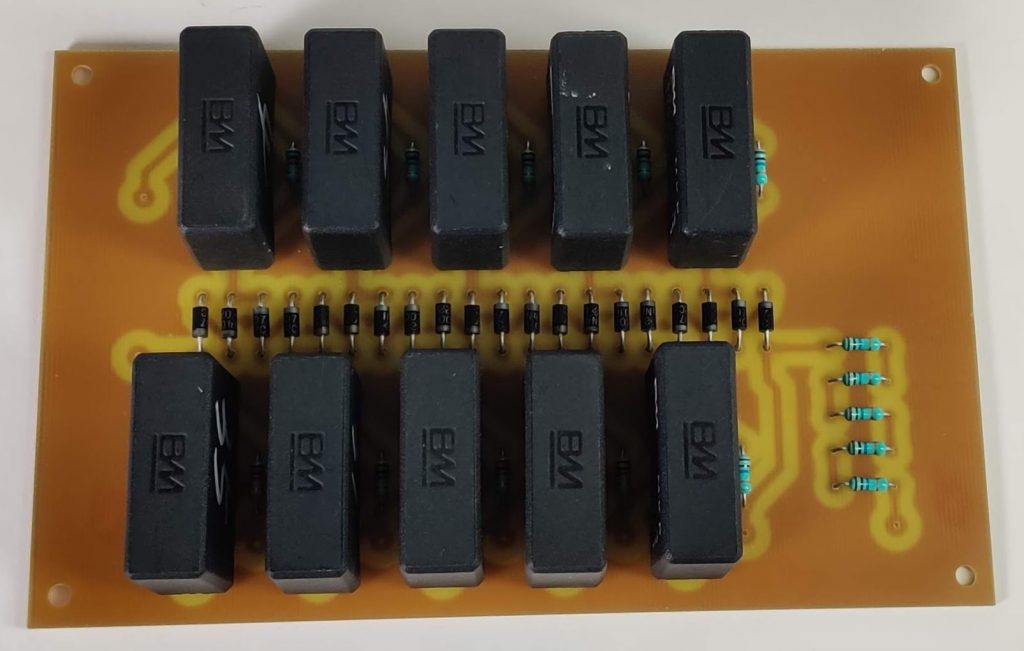 To drive the coil I designed this driver: 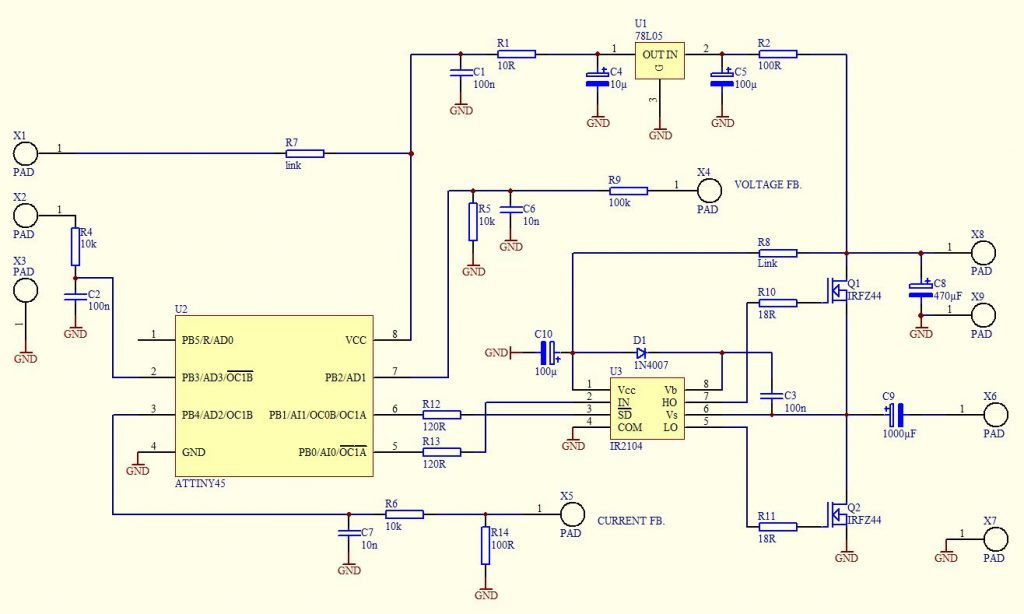 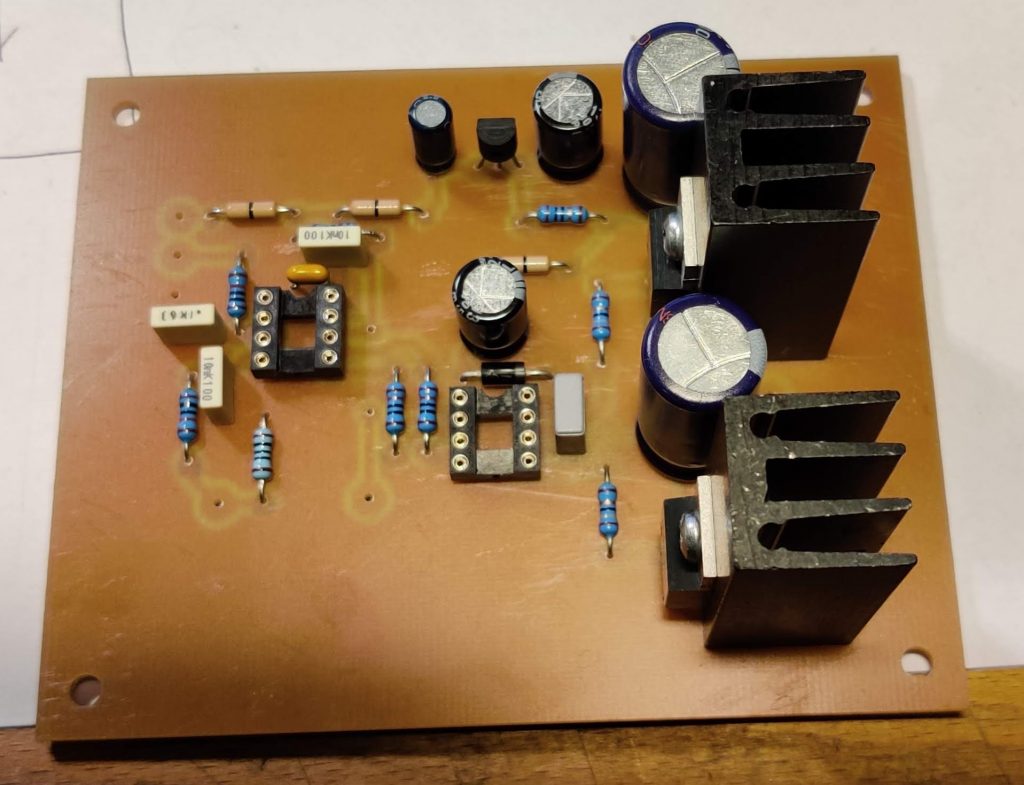 Rather than using a standard PWM chip I decided to use a ATTINY85 microcontroller. This gave the flexibility to try different drive frequencies and drive schemes without having to change components.  I wanted to be able to drive the coil at a fixed frequency but with variable pulse width.  I used the IR2104 MOSFET driver IC and by driving the input pin with a fixed square wave and the enable pin with a variable width signal at double the frequency I was able to generate this:

The resulting waveform on the output of the MOSFETS:

After putting it all together I was able to generate a regulated voltage on the output of the voltage doubler. A string of five 10MOhm resistors provided a 10µA voltage feedback from the output.

To get any useful voltage out of the ignition coil it needed to be run at around 5KHz. and at the end of testing it turned out that the poser supply would only deliver a tiny amount of current, around 100µA which was too little for most applications.

Another source for high voltage transformers are power supplies for electrostatic filters. 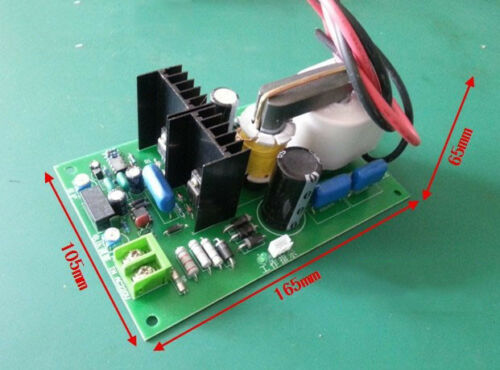 These are available on Ebay in voltages from 10-60kV and power ratings from 75-600W. They are unregulated open loop power supplies with over current (arcover) protection.  Output voltage is controlled by changing the switch frequency and the transformer primary is run directly from rectified mains. The transformer assembly has a built in  bridge rectifier on the secondary output. I suspect the transformers are the same used for CO2 laser power supplies but these are much cheaper.

Rather than modifying the existing construction I opted for replacing the primary and running the transformer from a much safer isolated DC circuit. 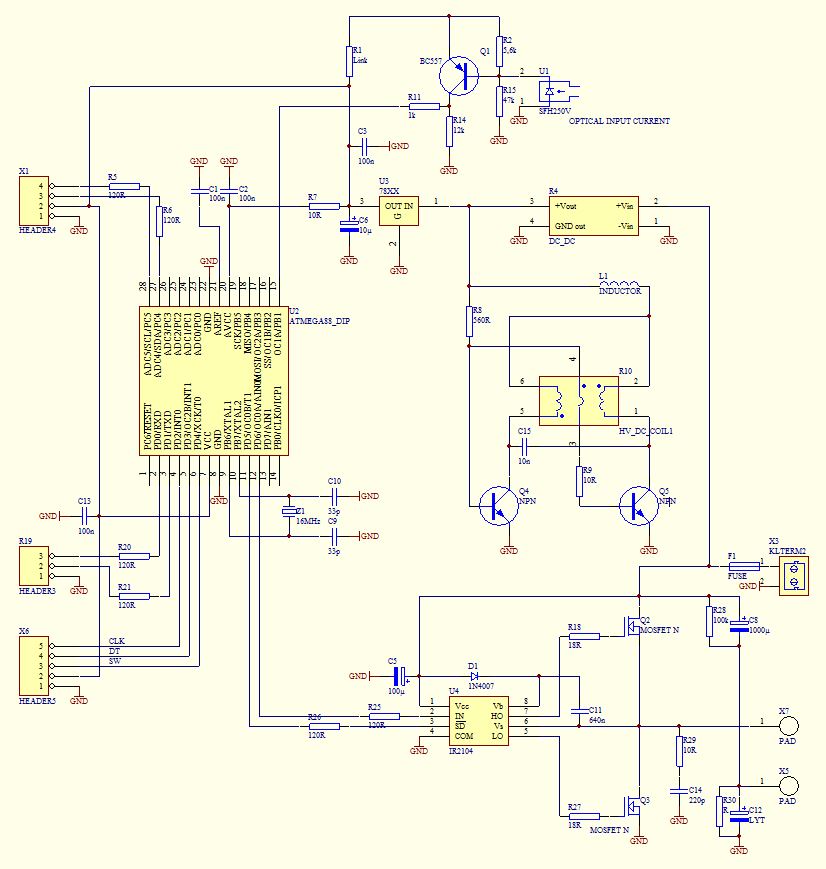 The circuit contains a microcontroller and power driver to drive the transformer primary. I wanted voltage and current control like a laboratory power supply but I also wanted the high voltage output to be completely floating and isolated from ground. To achieve this i made a remote sensing circuit that was optically isolated from the microcontroller by means of a optical cable. Power supply for the remote sensing module is provided inductively by a self oscillating ZVS circuit.

All in all the Vacuum system is an ongoing project and probably many more special power supplies will be added to the list.

Updates on the project will be in future posts.