In the recent past it was popular to use cheap surplus rubidium frequency standards but lately the source of these has more or less dried up. To make a more sustainable way of generating a standard frequency people started using the One Pulse Per Second (1PPS ) output from GPS receivers to synchronize a local oscillator. Many of the designs floating around the internet is striving to achieve the perfect lock using ever more elaborate filters, temperature control and expensive oscillators.

I just wanted something that was one or two orders of magnitude better than a free running crystal oscillator that was simple and cheap.

I came up with the following circuit: 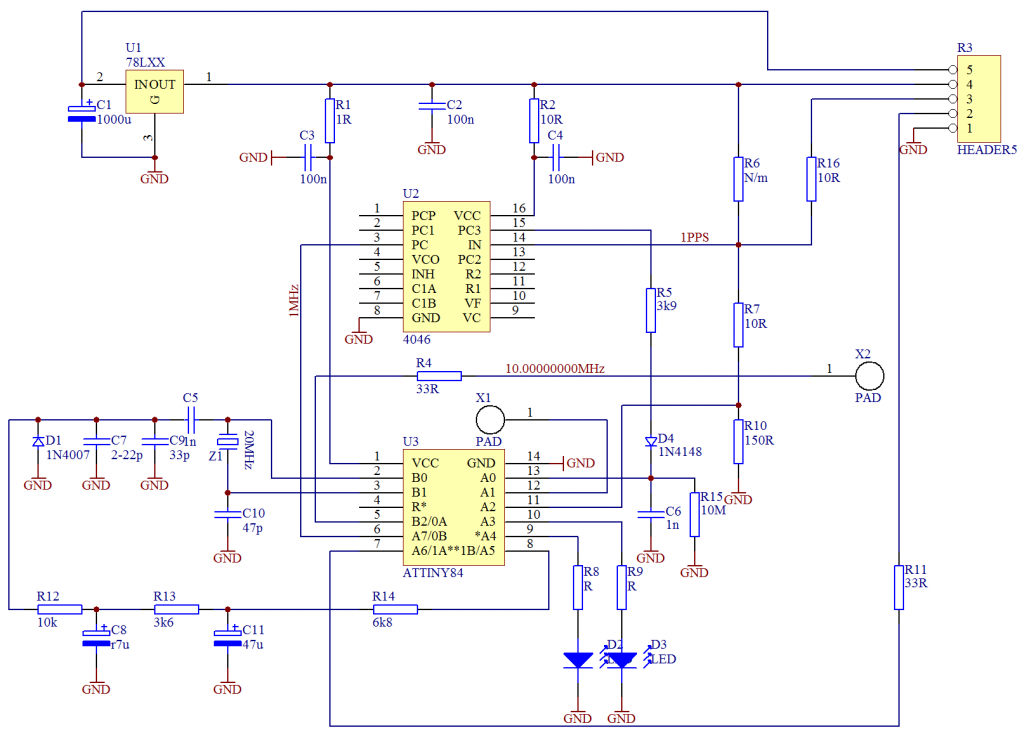 I decided to completely get rid of the expensive VCXO used in most designs by using the built in oscillator in a small microcontroller. By varying the capacitance applied to the crystal the frequency can be pulled a tiny amount. To control this capacitance I used a simple 1N4007 rectifier diode as it exhibits a suitable variable capacitance (15-30pF) at the voltage range between 0 and 5V. This variation results in a frequency deviation of +- 200Hz or so of the 20MHz signal or +-10 ppm. A variable capacitor (C7) is used to put the frequency right at 20MHz when the voltage is at the middle 2.5V.

The particular microcontroller I used (ATTINY84) can have its internal clock routed to a physical pin. This serves as the main 10MHz reference output from the system. I used a 20MHz crystal  since the internal clock can be the crystal frequency divided by 2. This has the effect of lowering the frequency sensitivity of the crystal and insuring a proper 50% duty cycle of the output.

To control the voltage over the diode I used a internal PWM generator followed by two low pass filters as a pseudo D/A converter. The PWM signal is generated by a 16 bit timer running at the 10MHz clock frequency giving a PWM frequency of around 152Hz but with a resolution of 16 bit. Since the diode voltage need to change really slowly, in the order of tens of minutes, this 152Hz frequency can be almost completely removed by a slow filter (R14,C11,R13,C8).

Another timer inside the microcontroller is used to generate a 1MHz signal.  The rising edge of the 1PPS signal from the GPS is compared to to the rising edge of one of the 1MHz oscillations by the 4046 chip. This generates a pulse between 0 and 1µS that is effectively a measure for the  phase and thereby frequency difference of the 1Hz GPS signal and the 10MHz reference output. The aim of the circuit it to keep the length of this pulse at exactly 0.5µs by slowly varying the voltage across the 1N4007 diode.

The firmware inside the microcontroller starts by reading exactly how many counts of the 10MHz signal is elapsed between two consecutive GPS pulses. this gives a ballpark estimate of how well the oscillator tracks the incoming pulses. A algorithm uses successive approximation to  vary the diode voltage such that 10000000 counts per second is consistently counted:

This insures that the pulses generated by the 4046 chip is almost at 0.5 µs and the signal edges compared is not some amount of counts off (false lock). By this time the frequency of the output will already be within a fraction of a ppm from the correct 10MHz.

To insure continuous lock and to compensate for the natural tiny jitter of the 1pps signal the firmware continues to compare the phase information from the A/D converter and applies tiny changes to the 152Hz PWM output to keep everything locked.

A couple of LEDs is signalling the status of the system. By the time frequency is established by simple counting the first LED is lit. Whenever the phase error over time has fallen under a certain range over time the second LED turns on.

The firmware (provided here for completeness) does have a few more things going on in terms of housekeeping and monitoring but the overall function is as described.

I started out prototyping some of the functionality using a regular Arduino then moved on to ATTINY84: 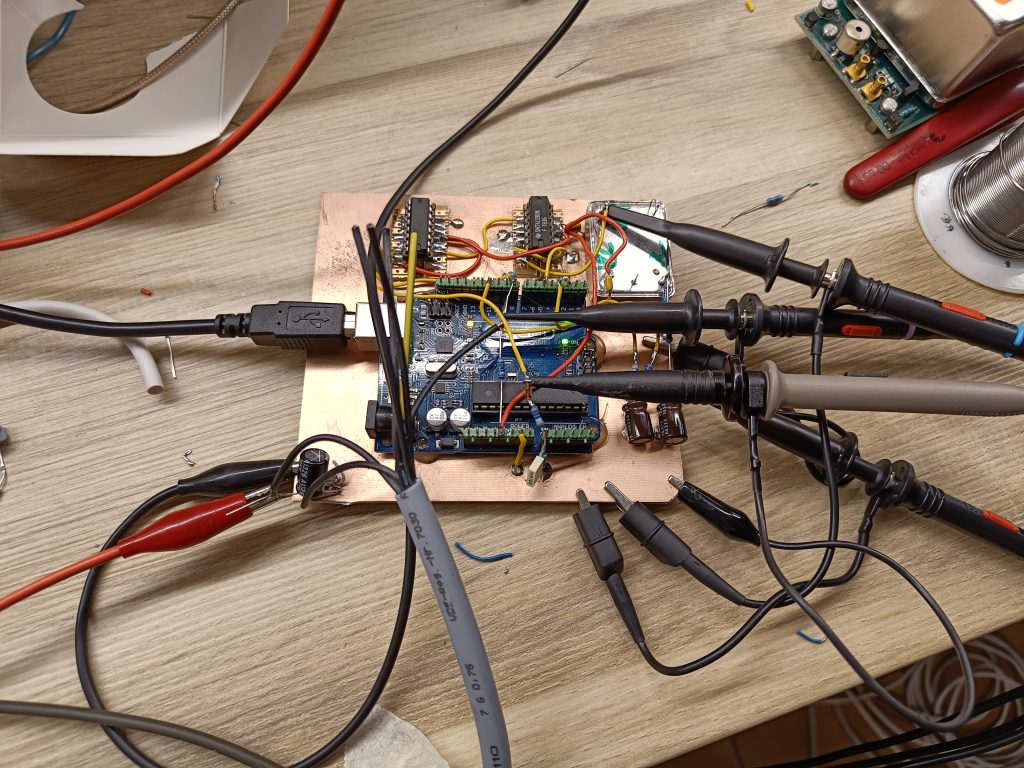 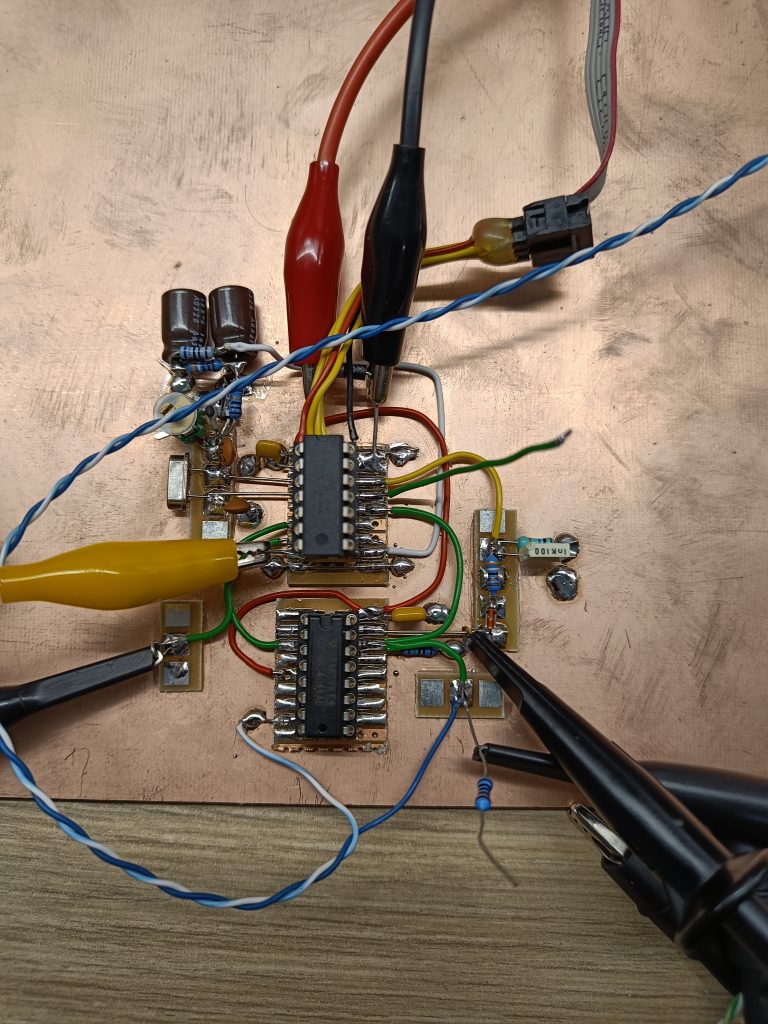 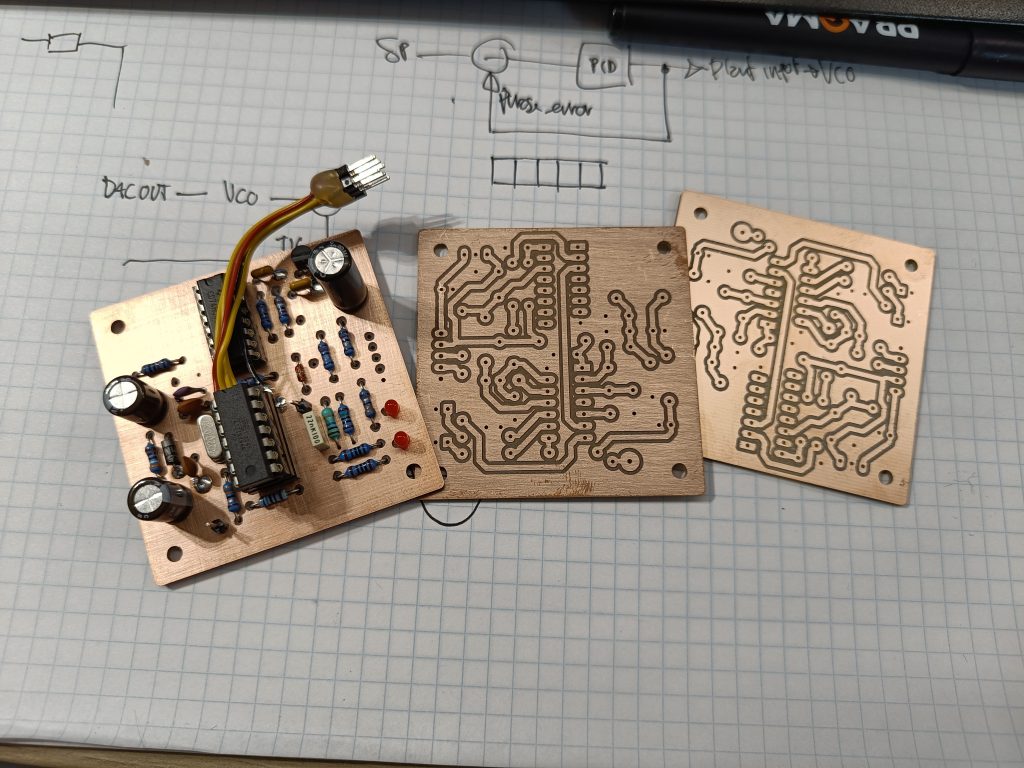 The GPS receiver is mounted outside to provide optimal coverage: 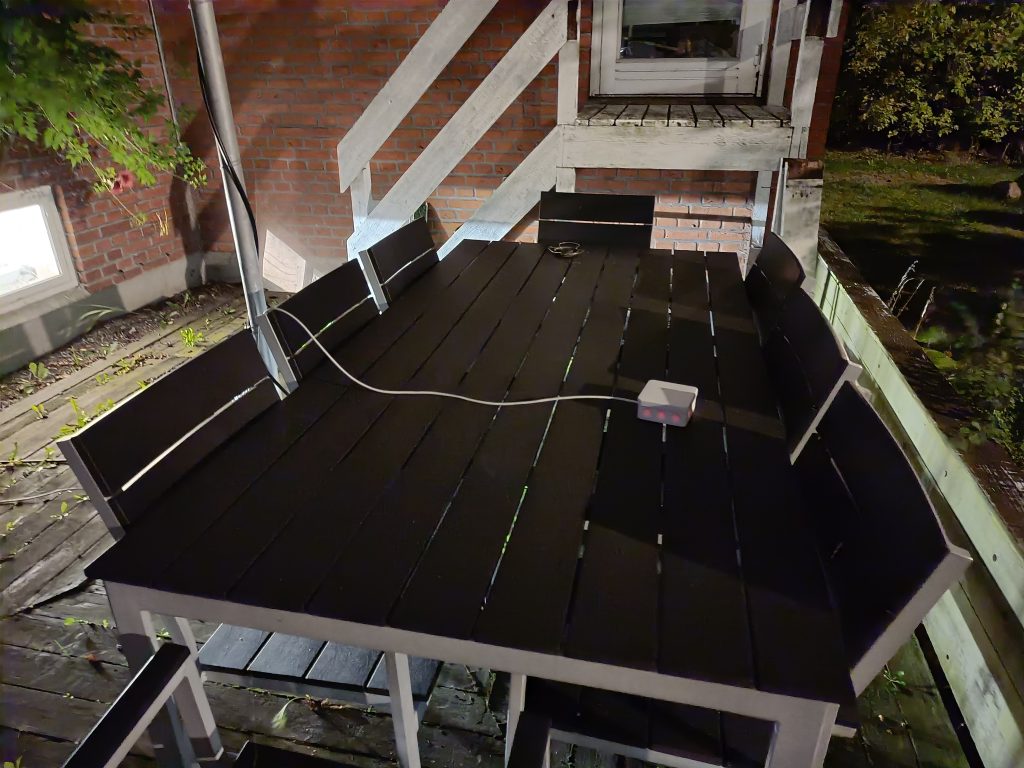 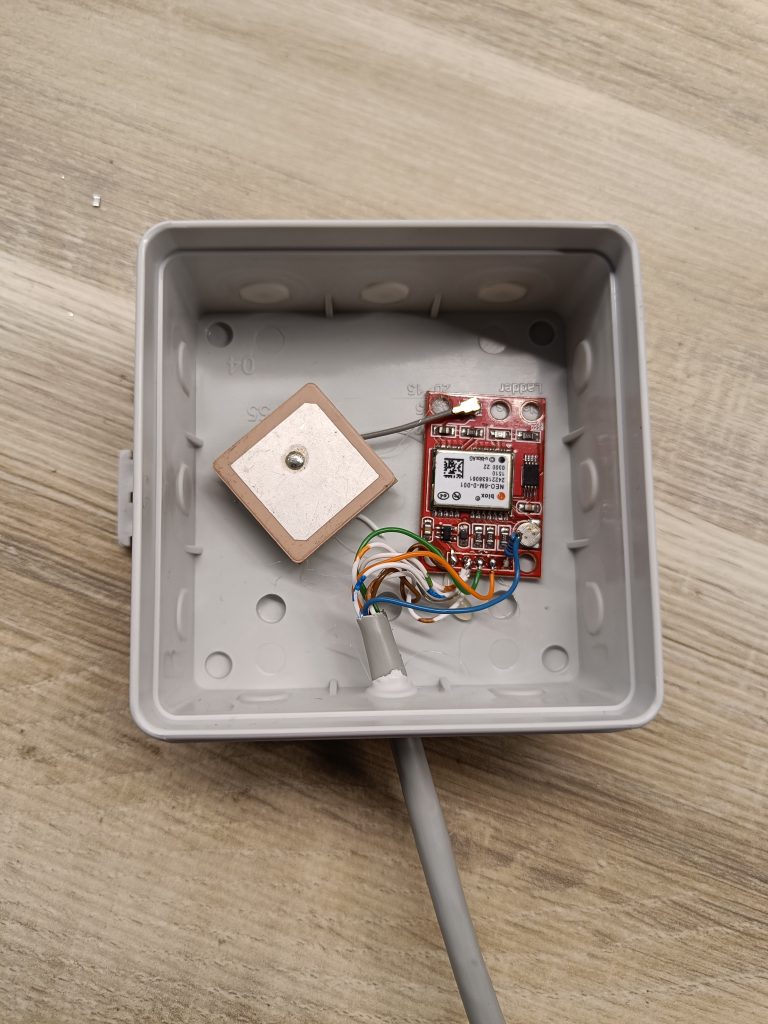 I personally think having a lightweight fast locking frequency standard is quite nice. I’m not looking to achieve record accuracy I’m fine with a couple of orders of magnitude better than your standard un-locked crystal oscillator.