I have always been interested in how refrigerators and refrigeration systems works. Since the ban of Freon and other CFC gasses working with these systems has been highly regulated and it seems like you need esoteric materials and serious permits. Lately by chance I have been involved in repair and service of various heat pump and refrigeration systems and have had the chance to chat with some industry professionals and experts. This has convinced me that you can build something out of easily available materials.

This is what you can slather together in a couple of hours with regular hardware store parts: 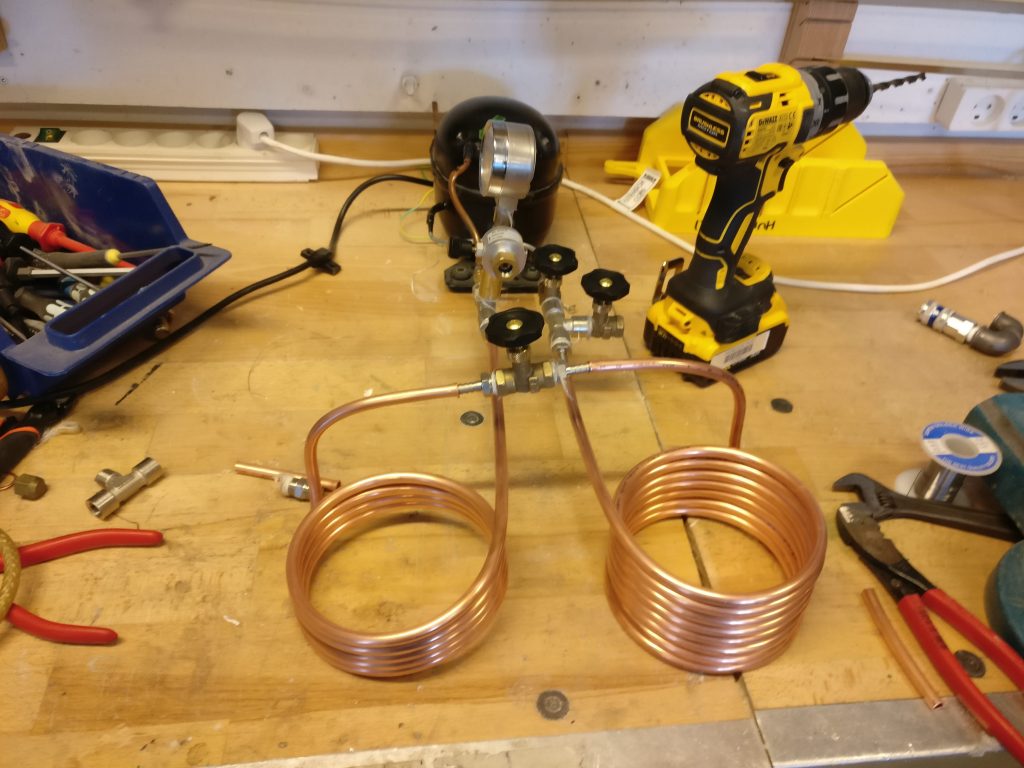 The compressor is from a discarded mini-fridge. The copper is automotive break lines and the valves are oil furnace cutoff valves. I used hose adapters as solder joint between copper pipes and 1/4″ fittings. I later changed the expansion valve for a precision needle valve but the shutoff valve worked just fine.

This is the system I chose to build and how I operated it: 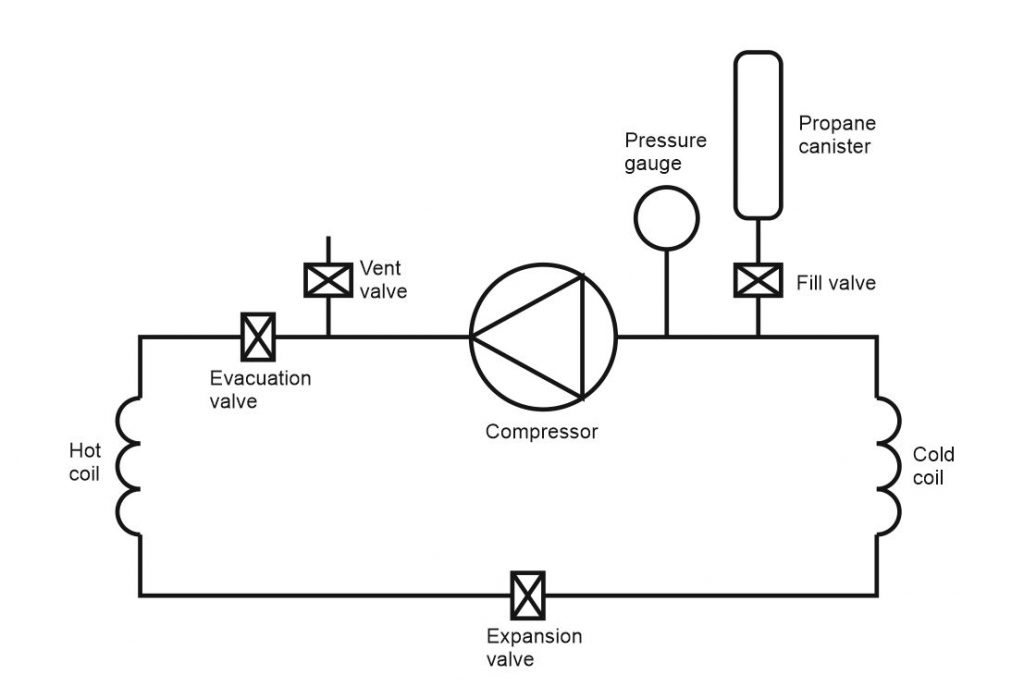 When first build all pipes and valves are filled with air. To remove air from the system the ‘evacuation valve’ + ‘fill valve’ is closed and ‘vent valve’ + ‘expansion valve’ open. When the compressor is run for a while all air is evacuated from the system.

The ‘vent valve’ is the closed, to isolate the system from the atmosphere, and the ‘evacuation valve’ is open to complete the circuit.

The ‘fill valve’ is opened momentarily to charge the system with refrigerant, in this case propane. I achieved best results with a dry pressure (gas phase only) of around 5 bar.

Once charged the compressor is turned on and the ‘expansion valve’ gradually closed until the pressure gauge reads around 1 bar (over atmosphere).

Depending on the pressure drop across the ‘expansion valve’ I was able to achieve a temperature between -5C and -27C on the cold coil while keeping the warm coil around 28C. I chose to run the system for a couple of hours with a -4 degree output temperature and a temperature difference of around 36C.

I chose propane (propane/butane mix, a.k.a. camping gas) as the refrigerant. It is cheap and easily available but has some obvious downsides. Historically refrigeration systems has used non-flammable gas since most systems was designed for CFCs.  There is a lot of opinions online about the dangers of using propane in place of more (locally) safe polyfluorinated compounds like e.g. R134A used in automotive aircondition. Personally I think the biggest problems arises when flammable compounds are charged into systems that are not designed for it and where service personnel and equipment are unexpectedly subjected to something wrong.

I consider using propane relatively safe. I am not particularly worried about a few grams of propane escaping over time. The system should be treated with the same respect as a camping stove or a propane torch. I do however have a couple of serious safety concerns:

There should under no circumstances be any oxygen in the system. At rest around 20C the gas/liquid phase inside the system will have a pressure of around 4.5Bar. Even when quite hot the pressure generally does not exceed 6Bar. and in theory the system will always be at a higher pressure than the atmosphere except in one situation: If the ‘expansion valve’ is closed too far the compressor wil start to create a vacuum on the cold side allowing a situation where a potential leak to suck in atmospheric air (thus the gauge on the cold circuit). I am convinced that if the pressure at any point of the system is kept over 1Bar no serious danger posses. I imagine some kind of safety pressure switch will do the trick. 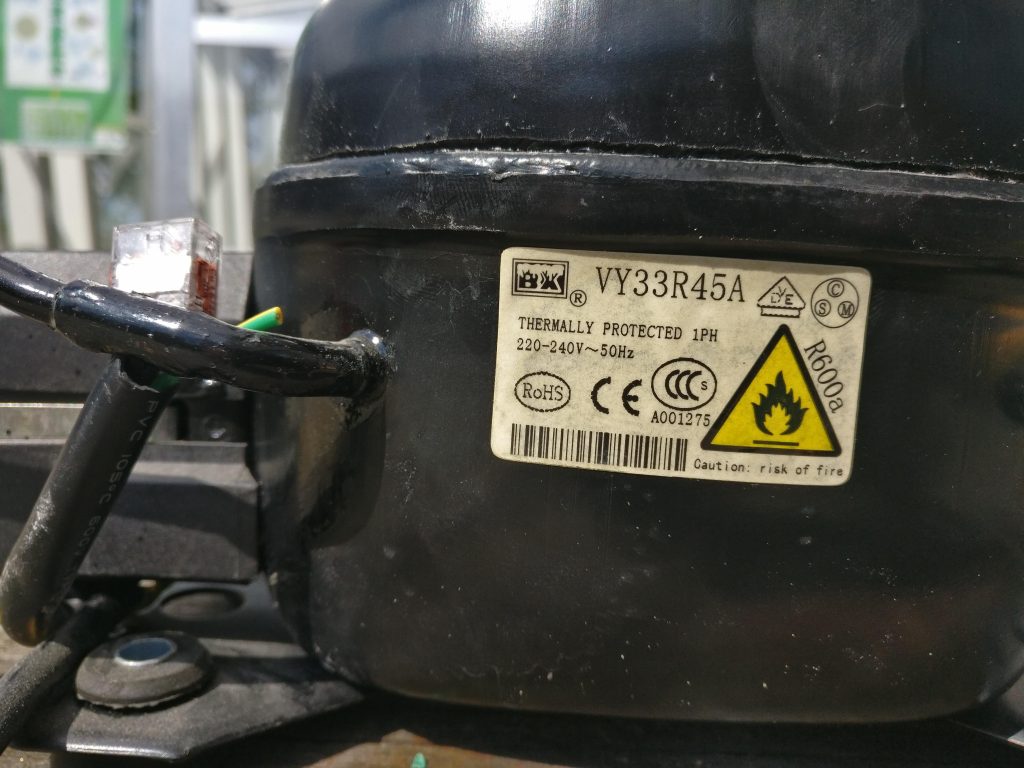 This is what the lab looks like after quick’n dirty prototyping: 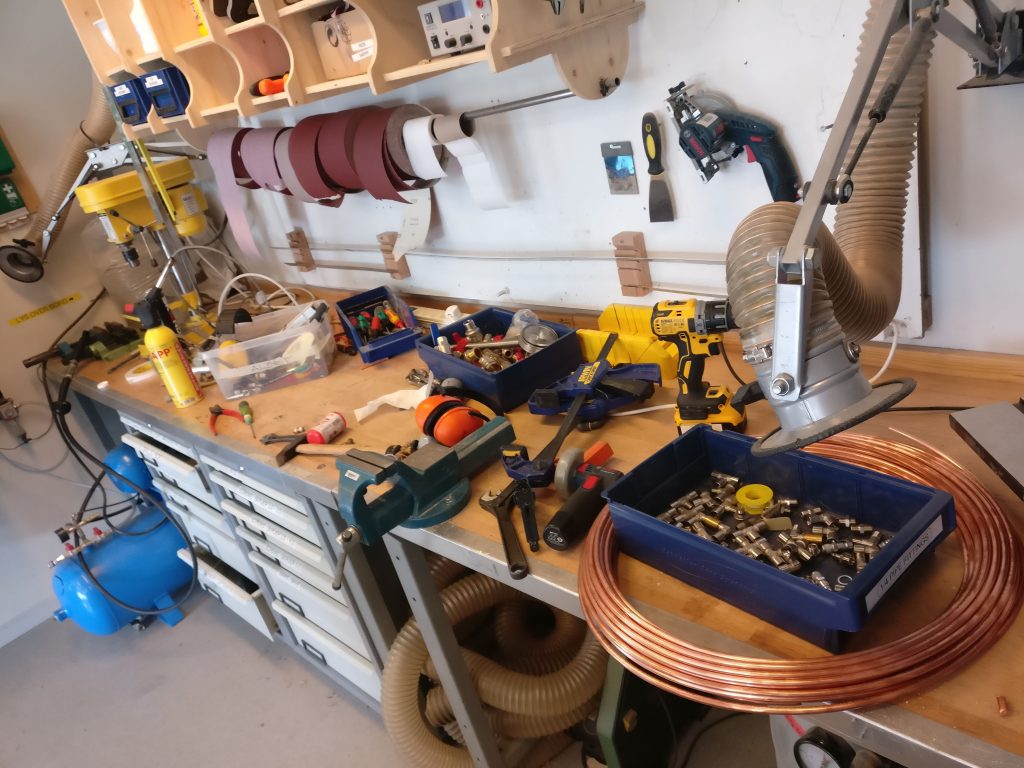