Apparently pipers (bagpipers) often practice their playing by ‘playing’ the steering wheel while driving. This led to the idea of rigging a steering wheel cover with sensors so that you can actually play:

The sensors are decorative metal buttons from a fabric store. Each button is connected directly to a pin on an Arduino pro mini board. There are eight buttons total each placed to correspond to a hole on the bagpipe chanter:

Using the Arduino synth library that I made some years ago and a variation of the “Pseudo Capacitive Touch” interface mentioned in an earlier post I was able to make a reasonable sounding bagpipe chanter. To map each key to It’s corresponding pitch I needed to find the actual frequencies of each note on the chanter. It turns out that the notes are a bit off compared to standard MIDI notes. Here are a table from this page thanks to Ewan Macpherson:

Since the Arduino Synth library are capable of playing up to 4 voices simultaneously it is also possible to play 3 out of the 4 drones of the Highland bagpipe but for training purposes this is not desirable.

Here is a video of the prototype being tested:

To make an easy interface to the car stereo and get power to drive the project I bought a combined FM transmitter and phone charger: 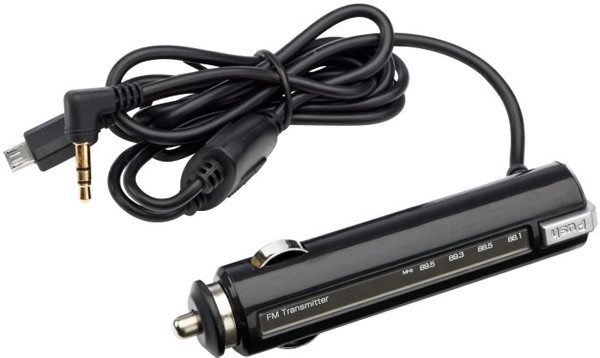 Here is the project on the road: