Was doing some very large scale projections with some people from Illutron and FabLabRUC.

In the projector we used the light was generated by a 4 kilowatt HMI bulb. The bulb and projector housing was fairly reasonably sized for the amount of light emitted but the ballast was impractically large and heavy.

The original power supply (ballast) works by connecting a very large inductor in series with the HMI lamp.  The reactive impedance of the inductor limits the current flowing through the lamp to the required amount, in this case 24A.

Since we want to do more projections and art using this type of light source we  decided to build a more practical power supply.

Since I wanted to distribute the input load over several phases I decided to design a inverter type power supply.

Some quick research online kept bringing this scheme up as the way to build a high power arc lamp ballast: 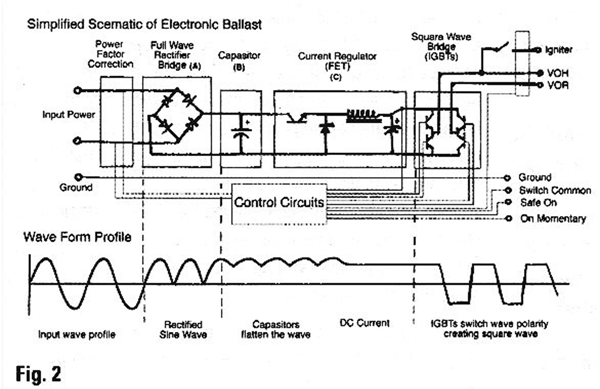 Though seemingly simple the above circuit poses a lot of problems. A lot of switches needs to be controlled at a lot of different voltage levels. I wanted to reduce complexity by reducing the number of system components so I initially proposed this scheme:

Here I would only have four switches performing both the Buck function and converting the result to low frequency AC. I eventually abandoned this scheme since A) current sensing would take place at a large negative or positive voltage and B) no terminal of the lamp would ever be tied to a near neutral point making filtering and noise reduction difficult.

Instead I chose this scheme reducing complexity even further: 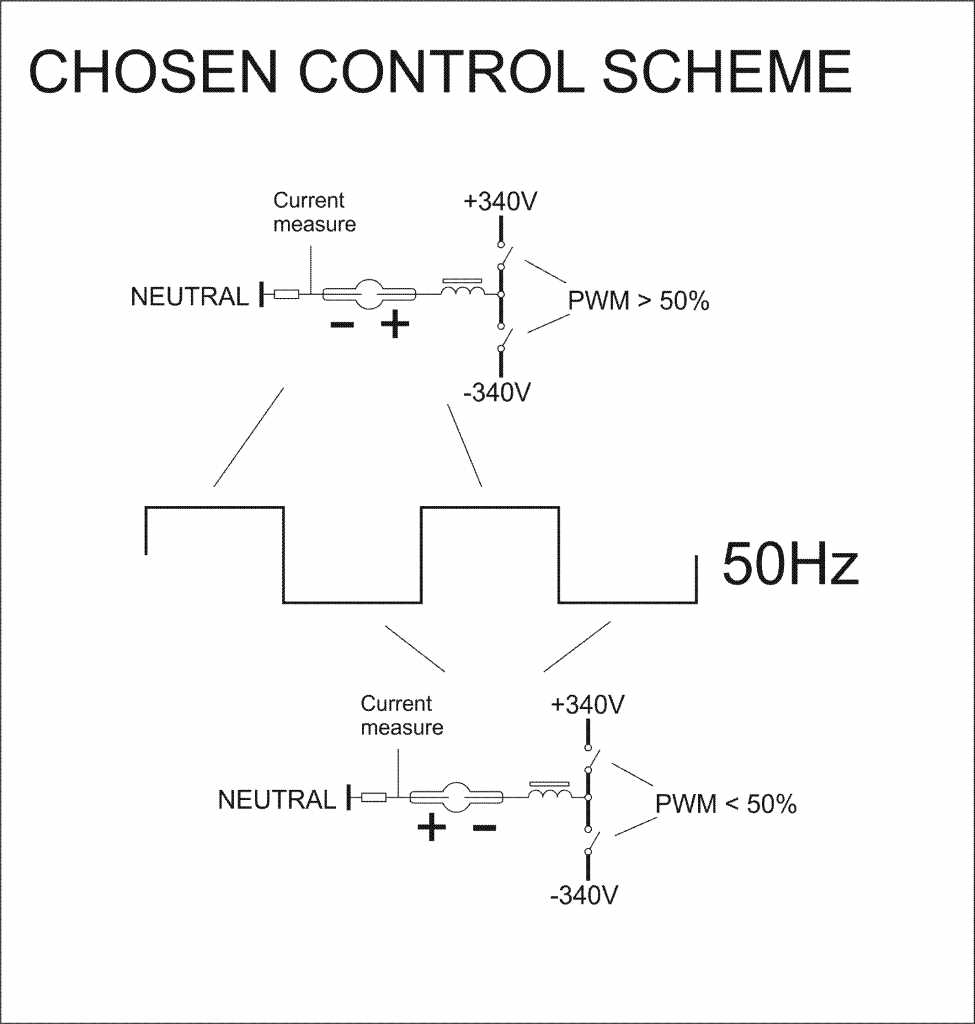 The three phases of the mains power is rectified into one positive and one negative 340V DC buses. Switching takes place between the positive and negative bus. If applying a 50% duty cycle to the switches the resulting average voltage over the lamp will be zero. By varying the PWM between 0 and 100% any positive or negative lamp voltage between -340 and + 340 can be achieved. Since one lamp terminal is always tied to neutral current measurement can conveniently be performed at safe voltage levels.

We determined the following specs for the power supply:

To determine the load on the switches I did the following calculation: 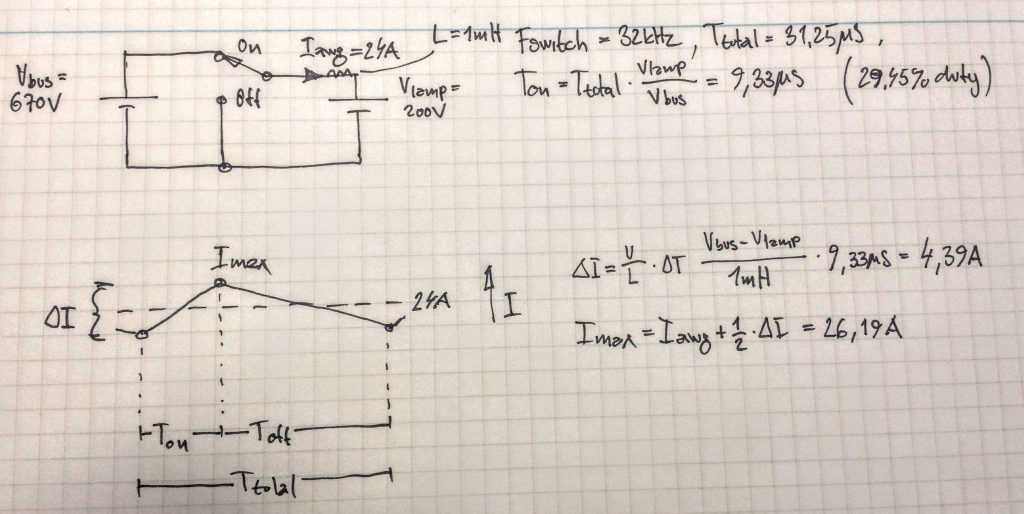 Changing the switching frequency to 62.5KHz I could eventually achieve similar results with a much more convenient 220µH inductor.

To start things off I built a circuit to convert 3 phase AC to DC: 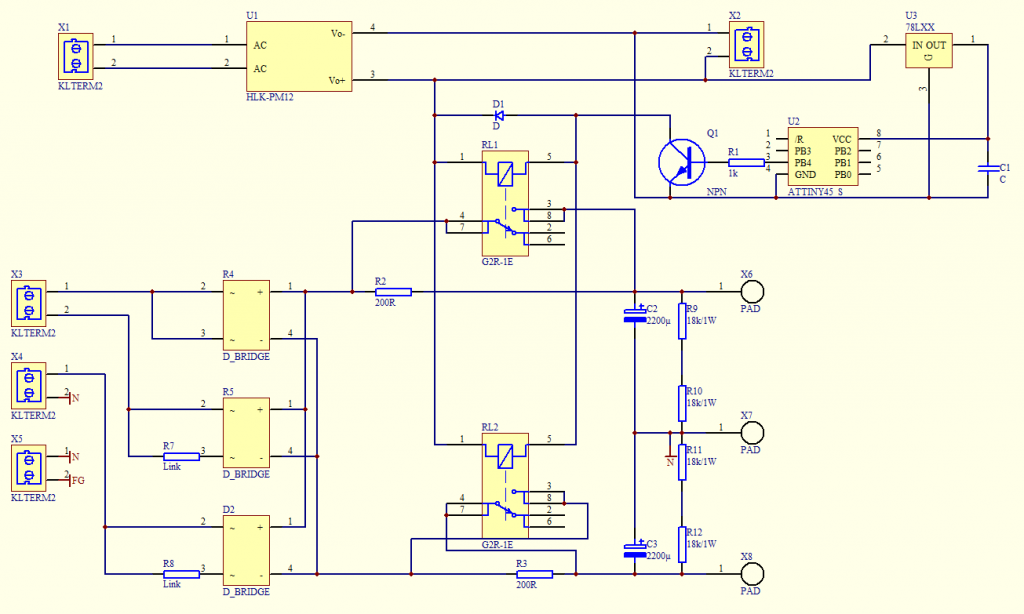 I used three one-phase rectifier modules since I had plenty of those. Two resistors limit the in-rush current. These resistors are short circuited after three seconds by relays controlled by a small micro controller. This module would provide +340V and -340V centered around neutral:

For the inverter I initially chose these IGBT switches: 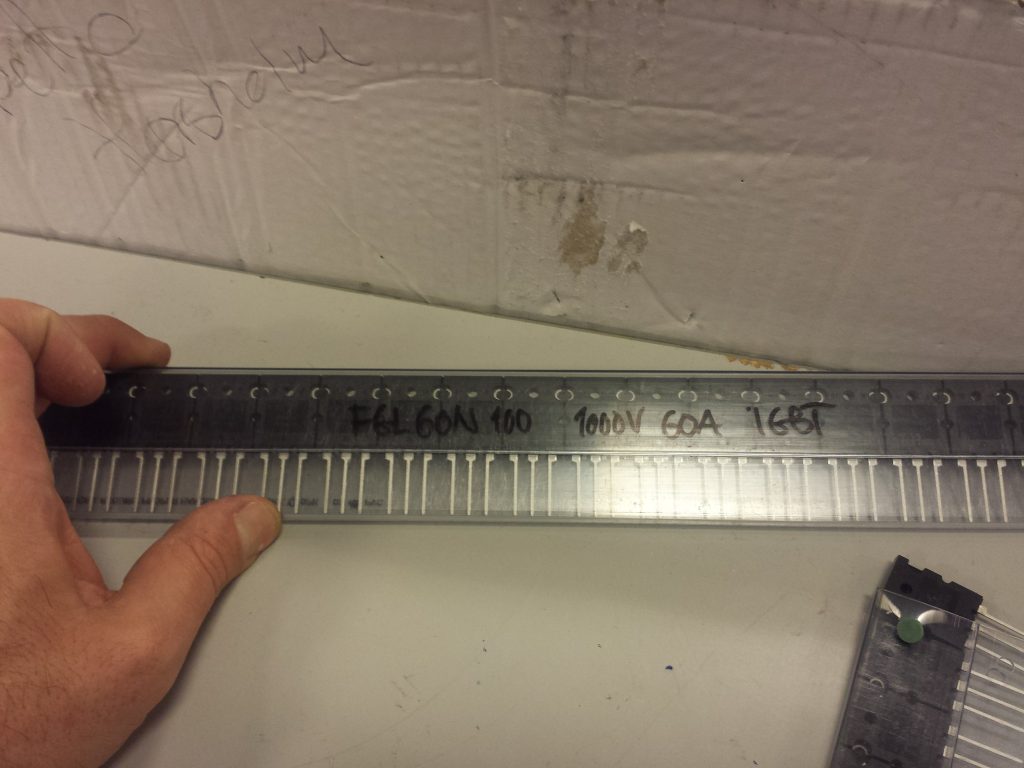 Apparently good for 1000V@60A with a power dissipation of around 100W.

Started out with this design for the inverter:

I tested the design at low voltage (+-24V) at the required current levels (35A) using a dummy load in a water bucket:

I learned that having both transistors on the same heat sink was a problem. The silicone isolators provided too much thermal resistance so I changed to two individual heat sinks:

For the first prototype I mounted the rectifier, some fuses and terminals and the inverter on a laser cut steel tray to avoid things from sliding around:

Now ready to run at full bus voltage I realized that the driver IC I used did not tolerate more than 600V … major bummer = back to the drawing board:

This time using a floating power supply for the two halves of the circuit. The lower switch driver was tied to -340V and the other followed the output between -340V and +340V. Both circuits were optically isolated from the control electronics driving the inverter. The lower circuit was powered by a isolated DC-DC converter and the top circuit by a so called bootstrap-scheme where capacitors was charged to low voltages when the output was at -340V. These capacitors would in turn power the top driver when the output was at +340V.

A lot of blown parts and fustration later two lessons was learned:

B) Output spikes beyond bus voltage overloading the bootstrap circuit.

Just for testing I completely removed the power supplies and powered the drivers with 9Volt batteries:

This seemed to work and I could test the circuit at full bus voltage.

The inverter driving the filter at  400V bus voltage. With 680V  bus voltage it looks roughly the same but I didn’t get a picture): 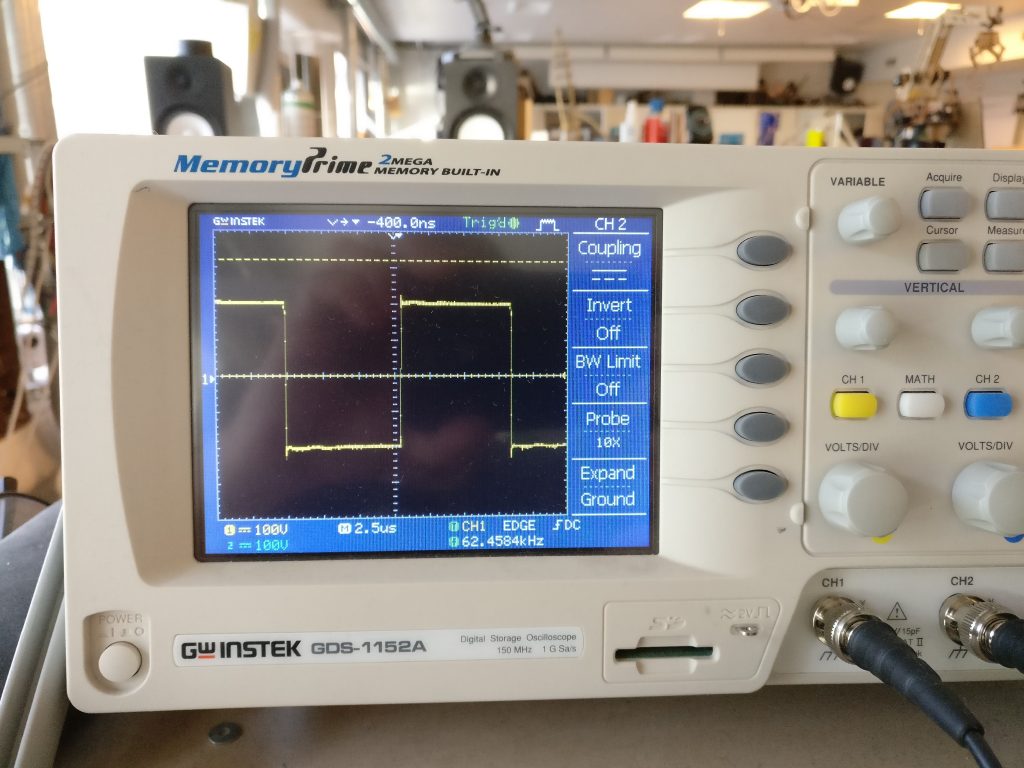 The overshoot at the edges are around 20V regardless of the bus voltage.

At full bus voltage I ran the inverter at around 10A for some time using a bunch of 1000W lamps as a load.

The temperature on the heat sinks initially seemed reasonable: 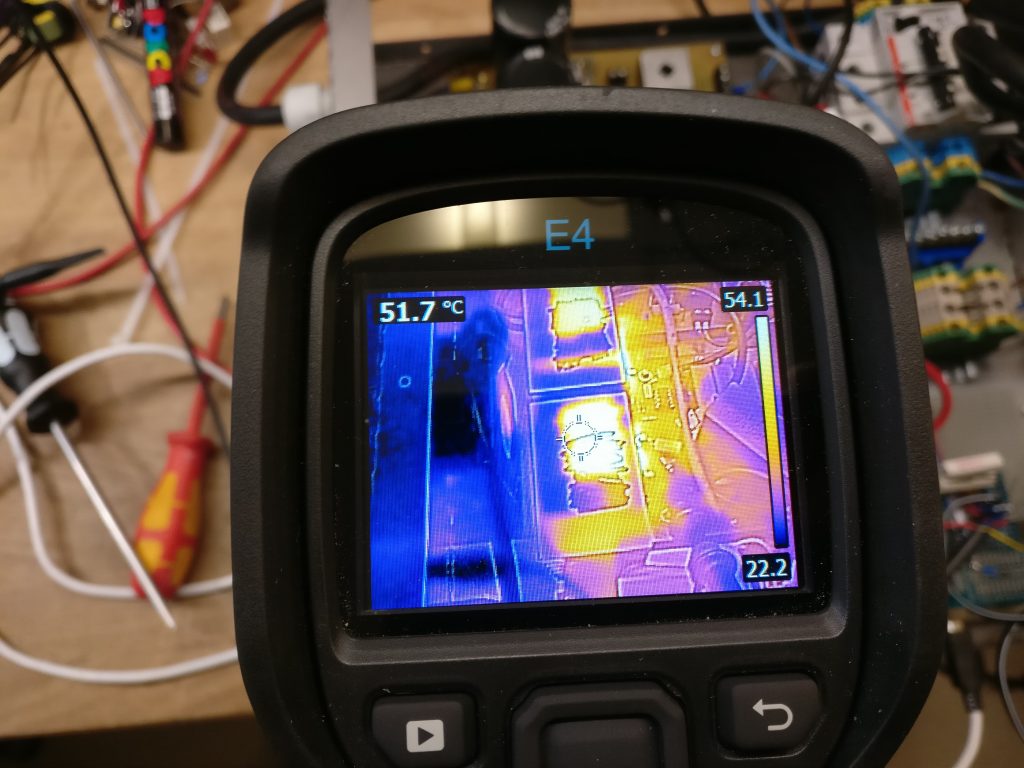 Without me noticing the temperature of the transistors rose to some high value and eventually one gave up with a lout bang exploding heavy PCB tracks and showering me with epoxy debris: 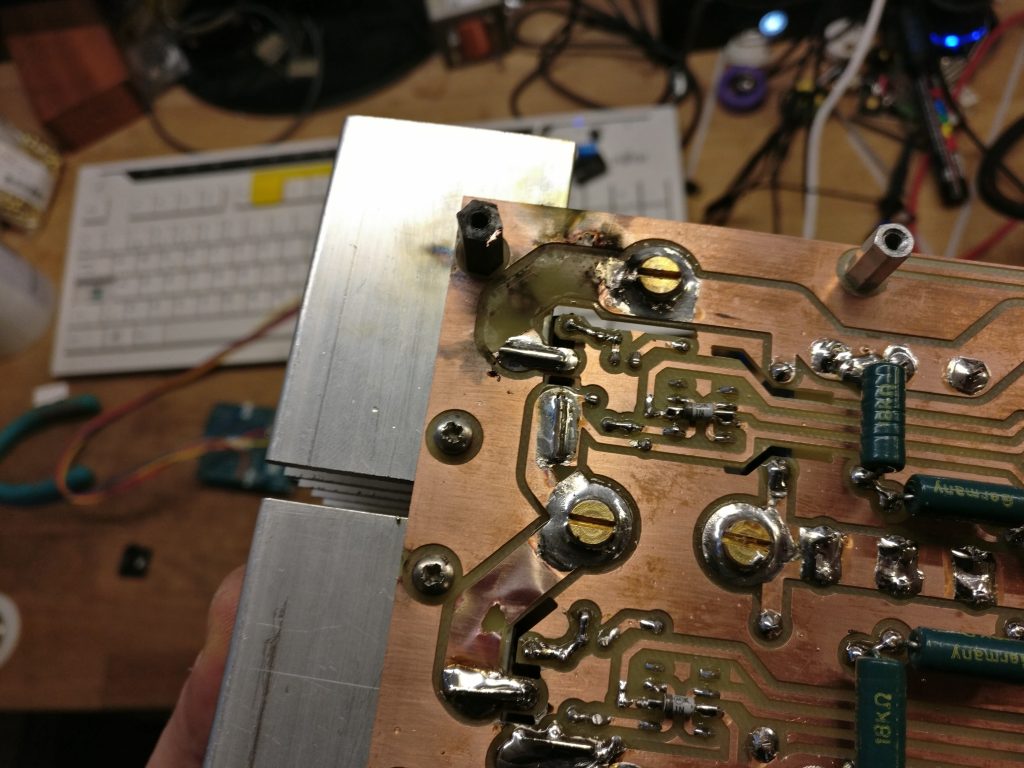 Since I now had to re-design the inverter again I thought I would first solve the floating power supply/gate driver as a separate module:

A self oscillating transistor circuit drives a small toroid transformer which provides two completely independent and  isolated power supplies. The power supplies drives two identical optically isolated gate drivers. The input of the opto couplers are wired in anti-parallel so that they can never be on t the same time. This in turn ensures that the power transistors they controls can never be on at the same time (with obviously disastrous consequences).

Since the G60N100 IGBT’s I used previously seemed to run hot I decided to step up to the more powerful and IXYN80N90C3H1. I mounted these on a larger heat sink and added a powerful fan.

I ran some tests where I put a low DC voltage on the gates of the transistors so they just half opened. I could then connect a powerful DC power supply over the transistors and use them as heaters. This way I was able to determine the cooling efficiency of the system at different power levels.  Initially 150W dumped into the heat sink would raise the temperature to around 52 Deg C. By adding a simple cardboard shroud around the heat sink I was able to reduce the temperature some 10 degrees.

To avoid getting hit by flying debris in case of more failures I encased the prototype with a heavy acrylic case. I also added a thermometer to keep an eye on the temperature:

After exhausting development and testing on this project I have run out of motivation, at least for now. I may take up the project at a later time.